Three volunteer doctors are gearing up for the next Paul Carlson Partnership medical mission trip to Congo, coming in mid- to late April. The focus of this team will be on surgery, including anesthesia. And the pattern is holding true: people are showing up when we need them.

Several months ago we started talking about needing a surgeon to go over to both operate and teach, and right about then Congo veterans Kurt and Linda Lindquist — both surgeons — decided it was time for them to go back. As we talked with them about the needs that have been identified by the Congolese medical leaders, we mentioned anesthesia. Within days Bob De Master emailed saying he was (wait for it) an anesthesiologist and he’d be interested in getting involved. All three are members of the Paul Carlson Medical Ambassadors, our primary source for medical volunteers. 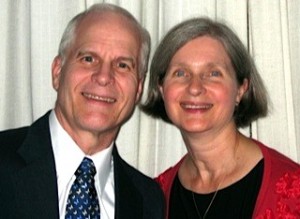 Kurt and Linda Lindquist are both general surgeons who were career missionaries to the Congo with the Evangelical Covenant Church from 1986 to 1997, until civil war forced the mission to close.  Since then they have worked in Fargo, N.D., at the VA Hospital in general and vascular surgery, doing direct patient care and training surgical residents. Actually, their connection to Congo goes even further back, or at least Kurt’s does: he grew up there, the son of ECC missionaries Franklin and Margaret Lindquist — who were cousins to Dr. Paul Carlson.

Bob De Master is a board certified anesthesiologist with 30 years of experience, the latest 16 of those years in McMinnville, Ore. He has participated in two previous short-term medical mission trips to Karawa, in 2005 and 2006, and has also done short-term projects in Ethiopia, Cameroon, Albania, Gabon, Haiti, the Philippines, Peru, Honduras, and Belize. He holds a certificate for Physician Training in Global Health from the Oregon Health and Science University.

The visit to Congo will continue the work of PCP and the Medical Ambassadors as partners to the Congo Covenant Church medical system. The trip is designed for three broad purposes: (1) help Dr. Richard Lingili, the CEUM Medical Director, assess the current state of the operating rooms, supplies and equipment; (2) offer surgical consultation and procedures to patients selected jointly by the team and Dr. Lingili; and (3) teach through both lectures and skills labs designed to improve the capability of the Congolese physicians and nurses. The combination of assessment, clinical assistance, and teaching follows a model that PCP has been developing and piloted last fall with the Helping Babies Breathe project.

Bob De Master says he has committed himself to participating in two short-term medical projects a year as long as he is capable of doing so. “I have previously been to the hospital in Karawa,” he adds, “and being able to accompany two surgeons who have served there as medical missionaries is an invitation that was very appealing.” For the PCP medical steering committee, the whole team came as gifts from God. They leave on April 15 and return to the U.S. on April 28. We’ll keep you updated as we get news from them in Karawa.