By giving to the general program, your support will be used for the most urgent medical and economic development needs in Congo, right now.

On July 16, 2021, the pharmacy at Karawa Hospital, including the laundry room next door, burned down around 2:00 am due to a lightning strike during a heavy rainstorm. Fortunately nobody was hurt, but medicines and supplies were destroyed. We are partnering with the Covenant Church of Congo as they determine next steps and seek support from their churches and other sources. If you would like to make a donation to the Karawa Fire Relief, our partners would greatly appreciate it!

Our mission, together, is to restore health in rural Ubangi-Mongala communities through training, medical services, quality patient care, and improved infrastructure.

Through the Congo Hospital Initiative, you can support the five regional hospitals managed by our partners in Congo. Your gift will be used strategically according to the specific initiatives of each hospital.

Nurses are the backbone of Congo’s medical system. Keep hardworking students in school, support school resources, and change communities for generations to come.

A key element to changed lives is the PCP Medical Ambassadors “training of the trainers” approach, which trains and equip local doctors and nurses in specific skills.

The PCP Medical Ambassadors research and procure training materials, supplies, medicines, and equipment that is appropriate for resource-limited contexts and highly skilled teams. These materials are often expensive. Support our training supply fund to help provide these necessary items.

Support the costs of PCP Medical Ambassadors who travel to DR Congo to build relationships, meet with their medical colleagues, and train in specific skills and procedures.

Economic growth is key to changed lives. Support agricultural development and bridge and road repairs so the local economy can thrive.

People in Congo know that investing in repairing bridges and roads can make a significant economic impact for their communities, as well as provide access to schools, hospitals, and water sources.

Paul Carlson Partnership is a 501(c)3 tax-exempt nonprofit organization and your donation is tax-deductible within the guidelines of U.S. law.

Debit or Credit Card (VISA, MC, or Discover), or
E-Check (most economical option for mission)

Double your contribution through your employer’s matching gift program. Consult your company for details on matching program availability. Please use the following EIN to ensure your match is verified: EIN#: 36-2645180.

If you would like to set up a legacy gift to benefit the ministries of PCP, such as bequests and estate planning, we recommend contacting Covenant Trust Company.

On occasion, PCP will seek funding for special extra-budgetary projects that fall within the scope of our mission and partnership. We invite you to consider contributing a special project in addition to your regular giving to our on-going initiatives. Thank you!

Désireé ATONGA NDELE and Matthieu KANGI KAFI are two nurses from the Karawa area who were chosen by the CEUM to attend a three year training program in ophthalmology. These two individuals were chosen based on the integrity of their Christian walk, high intellect, and commitment to the return to the Karawa area where they have family. These nurses will receiving training in Kinshasa and will return to Karawa to carry on eye care for the general population that ceased in 2017 when the only trained ophthalmologist in the area passed away. Several Medical Ambassadors and another donor contributed funds for the first year of training. However, due to COVID-19 the training program has been delayed.

Through gifts from several generous donors, the first year of their training ($21,600) has been funded. PCP is seeking $16,200 each year for the second and third years of their training program (total $32,400). 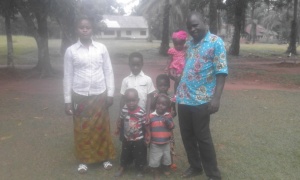 My name is Désiré ATONGA NDELE, born in Bondia on October 14, 1972 to father ATEKA ELENGE Leopold and mother TONDI MONDONGA Alice, who died 3 years ago. My father has been alone since my mother died. My father is still alive and has been working for several years as a teacher in Bominenge located 26 km from Karawa on the Karawa-Gemena road. My mother was also a teacher.

I am originally from Mongala Province located about 200 km from Karawa. I was born into a family of 10 children including 5 girls and 5 boys. The older child of our family was a girl who was a teacher until her death in 2004. One of my sisters is a teacher, the other has a degree in nutrition and two others are nuns in the congregation of the Theresian religious sisters in the diocese of Budjala. My four brothers are teachers, one of whom is a secondary school inspector and works in Gbadolite, about 200 km from Karawa. I’m third in our family.

I am married to Mrs. Koyolo Swambi Martine, and father of 5 children including 3 girls and 2 boys. My last child is nine months old. It’s a girl. Her siblings are 10 years, 7 years, 5 years and 3 years old respectively. The first three are in school and the fourth will go to kindergarten next year. My wife takes care of our home.

I also did training on family planning, preventive and promotional management of malaria at the community level. Currently, I am admitted for surgical training to assist doctors in surgical procedures.

I am a Christian and baptized in the Bominenge Parish of the Catholic Church of the Diocese of Budjala in 1988. 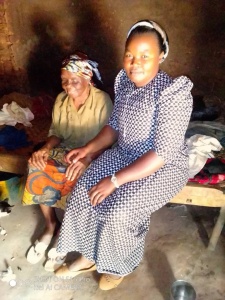 My aunt and sister

What motivates me for this training is that my aunt, my father’s older sister and the older sister of their family and mother of 10 children including 4 girls and 6 boys, all living. Her husband was a primary school principal. She was ill and suffering from eye disease. She had gone to see a charlatan for treatment. This charlatan told her that it was the sorcerers, who jealous of yields of her field crops, took from her some of the products she harvested in the fields and put them in her eyes, where it must be treated with indigenous products and it will be cured. But other family members insisted that she consult at the hospital. When she arrived at the hospital and after the examination, it was decided to do eye surgery. As she trusted this charlatan, she refused the surgery and returned to follow the treatment that this charlatan had offered her. She followed this treatment until she became blind to this day. I think that with more knowledge in ophthalmology, I could help in the management but also in the awareness and communication on eye diseases. 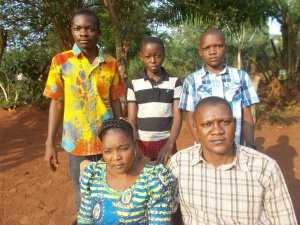 My name is Matthieu KANGI KAFI, born in Karawa on 11/26/1974. I come from BOYAGBAFETA village located 3 km from the Karawa mission on the road that leads to Gbadolite. I have been a nurse since 2003 in the Karawa health zone. Currently, I work at the BOGON Health Centre, located 3 km from Karawa Hospital.

I was born in Karawa to father KAFI SENEMONA who was the nurse of Karawa General Hospital who worked for 32 years in the pharmacy of Karawa Hospital, then died in 2010 and mother SANGOBOA, still living. Their union gave birth to 7 children, including 4 boys and 3 girls, all living. The youngest in our family is nurse Mado Ngbanzego Kafi who works in the maternity ward of Karawa General Hospital. I’m the second in the family. The third of our family is the administrative secretary at the KANANA Agroforestry Centre. He also works in the PCP-funded KCP coffee project. His name is Koso Kafi. The fourth is licensed in epidemiology and now works in the Bwamanda Health Area about 75 km from Gemena and 150 km from Karawa. Another is still in school.  The other two daughters are married, one is a mother of four and the other a mother of two.

I am married to Mrs. KOMBATI YAWI Brigitte, daughter of Papa YAWI DANYO, the former district manager of Karawa, who died several years ago and mother TDEAMBALI, alive. With my wife, we have a total of three children, including two boys and a girl, all alive. The oldest is a is a boy and is called Remy NGBANDO KAFI. He graduated in agronomy 2019. He is very interested in agriculture and intends to continue his university studies still in agronomy. The second is ESENGO KAFI Exaucé, a 14-year-old boy who is a student in Grade 8. The youngest is 13 years old and her name is DEAMBALI KAFI Praise. She’s at school, too.

In order to acquire more to better serve the sick, I am now a second-year student at the Higher Institute of Medical Techniques in KARAWA.

After my studies at the Karawa II Institute, I first worked as a teacher at the Karawa ROSSIGNOLS private school for 2 years before enrolling at the ITM Karawa.

During my tenure, I have received many trainings with BOTH PCP Medical Ambassadors and other partners. These include Helping the baby breathe and helping the mother survive. Along with the other partners, I received training on family planning, vaccination, epidemiological surveillance, leprosy, tuberculosis and HIV, African Human Trypanosomiasis, Vision 20-20 (eye health), malaria and data management in dhis2, Drug Management, Management of Neonatal Infections, Human, Material and Financial Resource Management of a Health Centre, Sexually Infection Management training in surgery at the reference health centre (unfinished) and emergency neonatal obstetric care.

My motivation for ophthalmology training comes from the fact that the Karawa Ophthalmology Department was the only department that served the population of NORTH UBANGI province, SUD UBANGI and MONGALA from an eye health point of view. After the departure of the American doctors, a trained nurse ophthalmologist remained to hold the service. He provided quality care to the entire population who had eye conditions and contributed to the reputation of the health care provided by Karawa Hospital. After his death, the ophthalmology department remained without a technician capable of caring for patients with eye conditions. 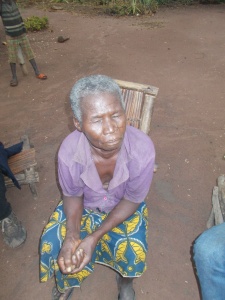 The guard’s wife who turned blind

The most striking example I have experienced is that of the BOGBAKUSA health guard’s wife when I was the nurse there. In 2015, this mother had an eye problem but she still could see. Her care required competence in ophthalmology. We referred her to Karawa Hospital for treatment. When she arrived in Karawa, she was unable to get the care she needed. On her return, she returned completely blind and remains as such until this day. I was deeply touched by this situation. I believe that by going to the school of ophthalmology, I can offer the best of myself to help patients in ophthalmology like this mother who is a mother of the family, who today has become blind for lack of proper care for lack of trained and qualified staff.  That’s what drives my desire to go to ophthalmology school.

Please give to the Medical Ambassador Training Fund to support the ophthalmologists. Indicate in the giving notes that your gift is for Ophthalmology Training. Thank you!