RED WING, MN (July 23, 2014) — Julie Malyon, a nurse and director of a free medical clinic, was curious about the expression on her dad’s face when she returned from the Women Ministries Triennial last year and told him she had learned about a wonderful ministry called the Paul Carlson Partnership. She explained that she wanted to help their work in the Democratic Republic of the Congo and that she planned to travel with a group of medical personnel from the Covenant to the impoverished African nation. 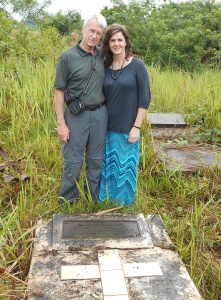 “I asked him about his reaction because I could tell there was more there than what I had just told him,” she says. Then her father, Jim Walker, a physician, told her a story.

It was the martyrdom of Covenant missionary Paul Carlson in the Congo, Walker explained, that inspired him to go into medicine and to use his skills to serve the poor.

“It was one of those moments that causes your hair to stand up,” Malyon says. “I remember him saying he had gone into medicine because of a missionary. But I didn’t know it was because of Paul Carlson.”

That moment led to father and daughter working alongside each other treating patients and educating doctors at a hospital in Congo earlier this year. It was the first time they had worked together professionally.

Walker, a member of Cedarbrook Covenant Church in Menomonie, Wisconsin, was a junior in high school and planned to become an electrical engineer when Carlson was killed by rebels who had kidnapped him. “Profoundly impacted by his story, I wrote my senior English paper about him,” Walker says. “I sent a letter to his brother, Dwight, which he graciously answered.  After these events, I never wavered in my desire to be a physician and to consider a career in medical missions.”

While in medical school, Walker and his wife, Patti, spent three months in the African nation of Cameroon. “We felt that the biggest lesson God taught us then was that missions is an attitude not a place,” he says.

For the past 37 years the family physician has treated patients in Menomonie. That work included founding a free clinic and serving on short-term mission trips.

For more than 20 years, Malyon, a member of First Covenant Church in Red Wing, had sensed that God wanted her to keep an open mind about serving in Africa. When she heard about PCP at the Triennial, Malyon left the event excited that the time had arrived.

When she heard her dad tell his story, she initially thought he should go instead of her. Then they thought it would be a great opportunity for the two of them to help some of the poorest people in the world. His career would be coming “full circle.”

So earlier this year they traveled with a group of PCP medical ambassadors to Congo on a fact-finding and training trip at several clinics and the hospital in Karawa operated by the Congo Covenant Church.

“We both got to watch each other teaching, and it was great for me,” Malyon said. “I loved to see my dad teaching.”

“We’ve always been close but it was really special to work together professionally and support each other,” Walker says. “We did a lot of sitting together and helping each other process what we were experiencing, so it was good to have someone close to you helping you.”

They processed what Walker kept calling the “incomprehensible” poverty, medical needs, and lack of access to care. People were dying regularly from conditions that are easily treated in the United States.

One particularly difficult event was a woman who died while giving birth as Walker examined her. “Despite his having delivered thousands of babies, this was the first time a mother died for my dad,” Malyon says. “It was pretty impactful to go from that experience to teaching a course on helping mothers survive, so it was good to be there for him.”

They did save lives while there, but just as important, they taught life-saving skills to Congolese medical personnel, who have since been able to train others. Women and children who once would have died are now alive because of that training.

“Being there was such a unique opportunity that is difficult to match—just the opportunity to save the lives of so many people,” Walker says. “You don’t get too many chances like that.”

Malyon and Walker are now committed to getting other medical personnel to help PCP improve the Congo Covenant Church’s system of hospitals and clinics, by far the largest one in Equateur Province, by becoming medical ambassadors. Malyon emphasizes that the medical personnel don’t need to travel to Congo, but their participation in a specialty focus group will help PCP consider how to help develop the best possible care.

“If you got involved in a focus group, you could change the life of a whole people,” said Malyon, who chairs the nursing focus group.

They also hope to encourage churches to participate in the Congo Clinic Initiative, which pairs churches with an individual clinic or hospital. A friend once said Walker’s greatest accomplishment was getting the free clinic started.

“I think there’s a lot of truth to that because there are a lot of people who have little care,” says Walker, who chairs the OB/GYN focus group. “But to compare that with the extent of need in Congo—I think the opportunity to invest in a Congo clinic becomes even a greater opportunity because the need there is so much greater than the need here.”