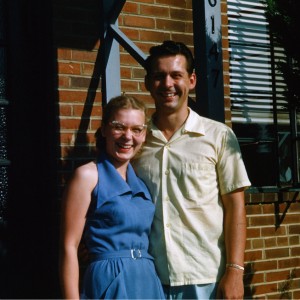 A personal story from Mark Eastburg and father, John Eastburg.

During the Korean War my dad was in the Navy, stationed near Washington DC.  Because of his Covenant and California connections the Carlson’s reached out to him and invited him over frequently.  He told me about how soldiers would often find hospitality with the Carlsons.  This photo was taken during one of his visits.